I'd Call this Wedding a Raging Success 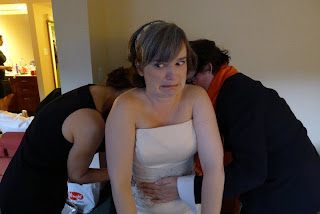 I've been married for 11 days now, and just realized I never got around to updating my remaining readers about the wedding. Probably because most of y'all were there.

It was awesome. Fun. Exactly what we wanted, and totally worth the months of hassles and planning. We should have a wedding every year. It was like the biggest funnest kegger ever, with sliders, pasta and great beer. And very relaxed, despite a few kerfuffles, misplaced mothers, minidramas and broken cake toppers. (I found my cake topper alter ego headfirst in the cake and wobbly, which is exactly how I'd intended to look by the end of the evening.) Oh, and the ceremony clocked in at a luxurious six minutes, leaving lots of time for bonding, dancing and mayhem.


Best of all, it was a family affair from start to finish. That includes the families we were born with, and the ones we've put together for ourselves. Our officiant was the friend who introduced us, all of the decorations were put together with the help of many friends and multitudinous mimosas, three friends volunteered to be the string trio for the ceremony, and everyone pitched in wherever they could. (And, if they didn't, you better believe I deputized them at random. Thanks for putting out the ceremony programs, The Buddy!)

A few memories, from what we can remember:

1. Let's just say Brando and I are not the most graceful of dancers. Well, OK. Imagine two Clydesdales with four left feet, all of which have been encased in Jell-O. During our first dance, a lurching disaster to the tune of "Can't Take My Eyes Off of You," all of the guests spontaneously began to sing along to the, "I love you baaaaaaybeeeee, if it's quite all right I need you baaaaaybeeee!" Which not only made me deliriously happy, it took a little focus off all the flop sweat flooding the dance floor.
2. Not only was there an after party at the hotel bar, there was an after-after party, hosted by my sister. People started randomly wearing each other's jewelry while snacking on fried chicken and bourbon. And a member of the wedding party fell off the side of the bed while attempting to stand. Which is when we all pretty much gave up on standing.

3. Virtually everyone pulled Irish exits out of the hotel bar, which meant we got a very awkward, "Hey, I have a stack of credit cards, what do I do?" phone call at the after-after party. (Related: Refugee, J. has your debit card.)
4. One guest, who shall remain unnamed, woke up still in her clothes and covered in wasabi pea snack mix.
5. Another guest showed up for breakfast still in his suit from the night before. Not for the reason you'd think, but because he'd forgotten to pack a change of clothes. But he was topped by the guy who showed up at breakfast, still drunk in what appeared to be a backwards t-shirt.

6. I thought I'd picked a relatively simple dress. Until we found out the crystal buttons on the back were very, very hard to fasten, leading to the scene in this photo. All five bridesmaids punched me in the stomach to hold me still. (I think it's secretly retaliation for all those Sundays with a glue gun and a tower of ribbons.)

So, it's over, to my mild disappointment but tremendous relief. If you were there, thank you, if you were not, well, maybe we'll do this again sometime.

In the comments, tell me if you've ever woken up in a pile of snack food, and, if so, what were the circumstances?
Posted by Shannon at Wednesday, March 16, 2011 12 comments:

Email ThisBlogThis!Share to TwitterShare to FacebookShare to Pinterest
Labels: my heart is a big squishy marshmallow, some days I put my head between my knees and dream of anonymity
Newer Posts Older Posts Home
Subscribe to: Posts (Atom)