I usually keep my spring cleaning pretty hands-off and metaphorical. But this year, I've decided to conquer the hall closet.
The hall closet is pretty well piled up with old school reports, a leopard-print Snuggie, more overcoats than seems strictly reasonable, party supplies, and my wedding gown.
*insert annoying cliche sound of record skipping*
Yeah. I'm approaching my fourth annivorcery and I still have my wedding gown. I just plain never got around to selling it. In fact, I even moved apartments with it. But it's time to evict this gown, if only to make room for my fantabulous collection of Pez dispensers.
To that end, I propose: Project Ditch the Dress. 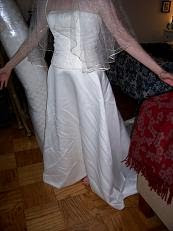 In the comments, please tell me the best way to divest myself of the final (albeit classic and lovely) symbol of my mid-twenties absurdity. A few caveats: Ebay is too much work, I've tried Craigslist, and I'm not paying to ship it anywhere (too expensive). I'm not keeping it or re-wearing it, as 2005 Shannon and 2010 Shannon have somewhat different bodily configurations.
OK, fine: the only way I am getting into that dress involves olive oil and a shoehorn - one of the many reasons why the model in the above photos is not me.
Ideally, I'd like to give it to someone who wants it. It's ivory, has a lace-up back detail and is a street size 2. I have more pictures I can email to anyone who'd like to see them. I'll throw in a veil and a box. Does anyone know a deserving (not to mention very short) bride? Or, can you come up with something really funny we could do with the dress (elaborate pranks in Adams Morgan, anyone?)
So, whatcha got? There might be a dress in it for you...
Posted by Shannon at Thursday, April 22, 2010 25 comments:

Filed Under: Things That Only Happen to Me

I would like to start by pointing out that all three Metro incidents occurred within a 24-hour period.

Incident One:
Morning commute. 8:22.
A woman (mid-fifties, fuzzy pants, posh hippie, white) got on the train and sat down next to me. She tapped the (mid-forties, professionally dressed, African American) woman seated in front of her and said, "Dr. Dorothy Height died."
At first, I assumed the women were coworkers discussing a mutual acquaintance. However, when the African American lady looked at her in bafflement, the white woman clucked a little chirp of falsely compassionate condescension and said, "I'm sorry, maybe you've never heard of her, she was a major civil rights leader."
I can only assume that this lady had been circuiting the metro, tapping random black people and informing them of Ms. Height's death in some wildly misguided educational mission.
This makes me wonder if I should have made it a personal mission to track down every aging hipster in Washington to inform them of the death of Alex Chilton.
Incident Two:
Evening, headed home after a Target run.
A (rather substantial) woman sat down next to me, gradually inching her way into my space. By which I mean, her book was practically shoved under my nose (sidebar: she was reading lesbian erotica which used a honey metaphor at least three times per page).
When we came to my stop, I gathered my packages and said, "Excuse me." She sighed and tucked her legs to one side, clearly expecting me to clamber over her as if she were a Old Navy-clad jungle gym. I smiled brightly and said, "I'm carrying packages, and will need some more room please." She gave me a look of death, aggrieved at my expecting her to stand up like a person who lives in a society, and moved over another fraction of an inch.
I eventually struggled my way to freedom, but she may or may not have taken a shoe rack to the knees in the process.
Incident Three
Morning Commute, 8:19 am
A woman boarded the train, and in a calm, clear voice said, "Could I get everyone's attention please?" I assumed she was either selling something or off her rocker, so I kept my nose buried in my newspaper.
After a moment, she began to explain that God had woken her up early that morning (really, God is her alarm clock) and called upon her to testify to commuters. The gist was standard street preacher - repent now, find Jesus, cast off Satan, Jesus is awesome, repent or you're gonna die. (Bad form to mention impending death on the Metro, btw.)
This struck me as being a tad intrusive, but, moreover, pretty dang ineffective. Commuters are professionals at creating their own private worlds. Hey, if we can't even recognize a world-class violinist* before coffee, there's no way we're going to recognize the onset of Armageddon.
In the comments, tell me about your favorite Metro weirdo.
*For the record, I frickin' hate that article. I don't think Pulitzers should be given for an article that could have been summed up as, "People on their way to work tend to be in a hurry." And, moreover, the condescending "People have sad lives because they didn't stop for music" thing is way overdone and insulting. People have jobs and obligations and mouths to feed, and as much as we'd like to enjoy a little music, we gotta be on time for work.
Posted by Shannon at Wednesday, April 21, 2010 11 comments:

Email ThisBlogThis!Share to TwitterShare to FacebookShare to Pinterest
Labels: I am deeply flawed and don't care who knows it, when in doubt cluck like a chicken and run like hell

I'm Not Really Looking for Anything Serious Right Now...Except Maybe the Check

Most restaurants are good to me. They usually don't give me chlorine gas poisoning, for starters.

However, I have a weird jinx with waiters. I always get the over-familiar, kind of creepy ones who practically invite themselves to pull up a chair and join in on the fun.
A week or two back, I was dining with my friend J. at what could be generously deemed the Highly Honored Window Seat, but was more likely to be the Put These Two Weirdos in the Farthest Corner Table Before They Infect Us with the Crazy Section.
The waiter was a piece of work. I wonder if he hadn't been hugged enough as a child, or if his inner rainbow needed a tuneup. Or perhaps his restaurant's training program had included extensive rebirthing and isolation therapy, and he was desperate for human contact.
Hey, the food was great, and I was happy. I'll take a side of creepy with a good meal anytime. (How else would I have survived multiple decades of dating?)
Eventually, it was time for dessert. J had let slip that he had never had a McFlurry, so we made plans to head over to McDonald's after dinner. When our waiter asked us if we wanted dessert, we demurred because, 1. we wanted McFlurries, and 2. We were worried "dessert" might be a thinly veiled reference to the waiter engaging in a sex act with today's gelato.
At that point, J made a fatal error. He told the waiter we wanted McFlurries.
I think we would have gotten out faster if J had said, "No thanks on dessert, we have a Sarah Palin/Dick Cheney striptease to attend. I've emptied my life savings to properly tip them."
The waiter took our McFlurry craving rather personally. He mock-harangued, then real-harangued me over not ordering the restaurant's dessert. Then, he informed me that McDonald's is a chain and if I had the proper community spirit I would at the very least pay an astronomical amount for a trendy gourmet cupcake.
Nothing would dissuade him. We skulked out of the restaurant, ashamed of our pedestrian taste in sweets.
Afterwards, I wondered about the motivations for his behavior.

Theory 1: The waiter had read about pickup artists and was "negging" his way to an upsell.
Theory 2: The waiter was prescient, and was warning me of an upcoming Sugar Apocalypse.
Theory 3: The waiter was kind of an over-familiar douche.

In the comments, tell me about a waiter who just wanted to be friends.
Posted by Shannon at Wednesday, April 14, 2010 13 comments:

Email ThisBlogThis!Share to TwitterShare to FacebookShare to Pinterest
Labels: differing tastes are not moral failings, weird restaurant experiences, when in doubt cluck like a chicken and run like hell
Newer Posts Older Posts Home
Subscribe to: Posts (Atom)